Essay: This is Homeschooling

We held the ceremony in a big, homey, old building that houses North Star Self-Directed Learning for Teens, a pivotal establishment in Jake’s later homeschooling life. The first row was occupied by three sets of grandparents (one local, one from Michigan, one from Florida), a great-aunt and –uncle from Michigan, and an uncle who had hopped onto a plane from his home in D.C. less than 24 hours after he touched down from a long business trip to Africa. The rest of the seats were filled with Jake’s friends and family friends. Like the core group of kids who attended weekly classes for eight years at our home. Jake’s first real friend who he met at almost three-years-old. Jake’s prom date. Our friend who also taught art to Jake. Our friends who run a CSA farm. My improv comedy troupe. That ragtag collection of people we are so immensely blessed to have in our lives looked up at me as I began speaking, so that I had to stop, take a moment to smile and say, “I think I have the best seat in the house.”

Though I suppose all kids are unique and wonderful in their own ways, Jake is not your run-of-the-mill kid, so we didn’t end up with a run-of-the-mill graduation. We had a DIY rock ‘n roll graduation ceremony and celebration, complete with a father-son musical duet written by Jake, an ear-splitting, wicked tight set by Jake’s band, and a guitar-wailing version of Pomp and Circumstance. A diploma was collected. Jake wore a cap and gown worn by his cousin the previous weekend. He gave a quirky, partially improvised speech from behind his beloved keyboard. The ceremony ended with Jake singing lead on his band’s cover of R.E.M.’s It’s the End of the World as We Know It (And I Feel Fine). They got a standing ovation.  It was friggin’ awesome.

In the creamy center middle of our graduation ceremony, I gave a speech. Me, being the mom and central educational facilitator for my son’s education from third through twelfth grades. Jake’s main teacher. His chauffeur. His defender. And, to his mind, his tormentor. 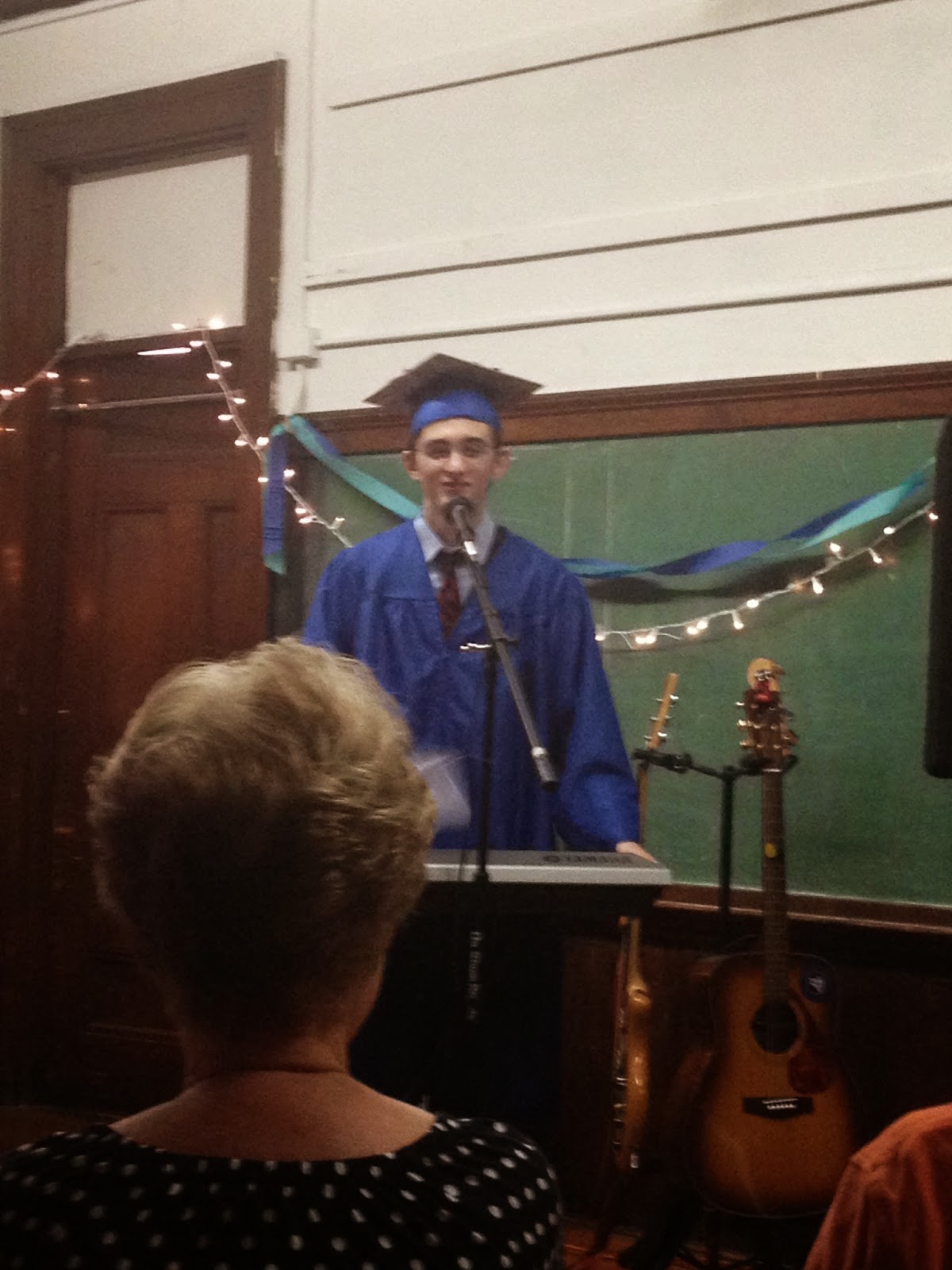 A lot of non-homeschoolers have trouble imagining what it is we’ve been doing for the last ten years. I think they picture that Jake has spent the last decade in the basement hunched over a textbook with a bare bulb swinging above him and me standing at a chalkboard while lecturing about something tedious. I guess we could have done it that way…if we had a basement. Instead, homeschooling, for us, has been…well…take a look around you. This is homeschooling. These people. You people. You are here today because you have all been part of Jake’s homeschooling. I see people who have directly taught him, like Chris who tutored him about genetics when he was in 4th grade and Lorelie who did so many plays with us and Dvora who brought us the Teen Think Tank classes and Josh and John who facilitate the North Star band and Dan and Karen who run the farm where we learned so much and who taught about being lifelong friends and Jimmy who taught art classes and Uncle Jonah who taught him how to tie a bow tie and his friends who taught him how to be friends and his family who taught him what a family means. Every one of you. Every conversation. Every interaction. Every joke. Every moment in the last ten years has been opportunities for homeschooling. Yeah, homeschooling wasn’t so much putting paper to pencil in a dungeon while a parent lectured. For us, homeschooling has been just like life. But a tiny bit more intentional.

From the beginning, I’ve thought of as our homeschooling adventure as The Grand Experiment, where I had a very small sample size and very large stakes. It was a big gamble, but we didn’t really have a choice with Jake. We wanted him to be in school. In fact, ten years ago I really didn’t believe in homeschooling. But when he was eight-years-old, school was not working for him. He was becoming someone we didn’t recognize – a troublesome, unhappy kid who didn’t like learning. Since all this damage was being done just so he could fit into a classroom - which in no way represented real world in our society - we decide to just go ahead and take a gamble on educating him in the real world in our society. And thus began our Grand Experiment with one of our most precious gifts as the sole subject. (And he was later joined by our other most precious subject, Sierra, who homeschooled for five years.)

Immediately, there was relief for Jake. Huge relief. Within six months of homeschooling, his previous teachers called him "a different kid." And as much work as homeschool was at times, it was so much less work and less stress that what I had been going through to help him in school. Every year, we allowed Jake to choose how he wanted to be educated, and every year he chose homeschooling. As we are eclectic homeschoolers, Jake has mostly chosen how he would like to be schooled and what he wanted to study. The only curriculum we've used has been math – Jeff and I recently figured out that between us, we’ve taught from 2nd to 12th grade math! The rest of his schooling was largely self-paced and fairly relaxed with few textbooks aside from math.

So this is what homeschooling looked like for us: Jake did some learning at home, on his own or with a parent. But a lot of learning took place outside the home too. Jake has taken classes and day-long workshops throughout the community, such as the Hitchcock Center and Teen Think Tank and at Beth Anne Moonstone’s place. He performed in theater in many different places, like here at North Star, at Greenfield Community College, at Hampshire Shakespeare Young Company where he’ll be performing summer as Julius Caesar. He did a lot of improv comedy in his younger years, but he seems to have grown out of that phase. (Unlike me.) Jake took a huge variety of academic and artistic clubs that I facilitated at our house for eight years. He’s read pretty much all the classics – though I only remember a few book reports, he seemed to enjoy most of them anyway. He hangs out with friends as much as he wants. He’s taken French class on the floor of our family room. He’s taken online classes about all sorts of stuff, like Astronomy and Physics and Viking warfare and goodness knows what else. If the glowing staff reports are to be believed, he’s become an immensely valued member of the North Star community. He is in a band that he loves and that has taught him a tremendous amount about being part of a community, working cooperatively, being a friend and a colleague, composing music and lyrics, what it feels like to sing lead, and, of course, he’s learned a lot about music. And he has a lot of downtime at home by himself, which he enjoys quite a bit. Jake kicked ass on his SATs and the GED. This year, Jake had his first experience with a formal educational classroom setting when he took four classes at Greenfield Community College – not that grades matter or anything, but he got all A’s. Over the last several years, Jake has written a lot, including two self-published books, at least one other manuscript, and a script for a play called “Hamlet 2025” in which he placed the entire Shakespearean play in a post-apocalyptic world. Jake recently released his second album. He went to the prom. He got accepted to the college of his choice.

More importantly, over the last ten years, Jake has learned what he loves to do. He has explored many passions over the last ten years, from Looney Tunes to writing to quantum physics to Dungeons and Dragons to Shakespeare to Doctor Who to music. And that is one of the things about Jake that makes me most proud. He is committed to following his passions. From the beginning, my biggest goal with homeschooling Jake was to help him get through his childhood and teen years with his confidence and self-esteem intact and undamaged. Bonus points for academic achievements. When we began The Grand Experiment, I just wanted him to come out of it feeling good about himself as a person and liking learning. And he does. Jeff and I are so proud of Jake’s success in this area.

And I have to admit, we’re kind of proud of ourselves too. We didn’t anticipate  that when we started homeschooling Jake, we started homeschooling our whole family. As it turns out, for us, homeschooling is a whole family affair, a totally different way of being together as a unit and a different way of approaching the world than we had been before. We became a homeschooling family ten years ago. Even though Jake and Sierra are no longer formally homeschooling anymore, we still are a homeschooling family and I think we always will be. Even though Sierra is a regular high school, she still approaches her work with a homeschooler’s heart and mind – we know this because her teachers have mentioned it. And we know that as Jake moves into the formal educational world, he will do the same – he’ll be a guy who has definite interests and passions and knows how to set goals for himself to accomplish great and small things over the course of the rest of his life.

Ten years ago, when Jake wasn’t able to conform comfortably to being educated in a bureaucratic system, we thought it was a bad thing, a weakness, a failure. But it turns out that it actually was a gift, a huge gift to all four of us, because Jake led us to homeschooling, which completely transformed our whole family dynamic in the most positive way. There are many ways to be a loving, intellectually thriving family – and you all serve as models of this every day – but homeschooling has been the defining element OUR particular loving, intellectually thriving family. And we all have Jake to thank for that.

As I wrap up here – much to Jake’s relief – I am going to make him grumble. Some more. Because I have one final homework assignment. Jake, when you were born, the thing I wished the most for you (and for your sister when she was born) was that you both leave the world a better place than you found it. So as you move forward in your lifelong education, I know you will continue to explore and achieve in your areas of interest. But I also want you to please keep that goal in mind too. Perhaps it may be making the world a more musical place or a place more open to geeky people or a place that has more literature or theater or science or whatever it turns out it be. Probably many of those things and more. But to get an A in homeschooling – that’s a joke, we didn’t do grades – anyway, to complete your homeschooling, your assignment is to please leave the world a better place than you found it. In anticipation that you will kick ass at that endeavor too, I thank you with all my heart.
Posted by Unknown

Email ThisBlogThis!Share to TwitterShare to FacebookShare to Pinterest
Labels: Essay: This is Homeschooling, Essays, Essays about parenting