The Zen of Improv: “That Just Happened” (Or “Moving Forward from a Clusterfuck)”

[The Zen of Improv is a series of articles about
the place where improvisation and Zen thinking meet.
You can find all the pieces here.]

You know that burning, sinking moment that happens after something potentially horrible just occurred? We feel our fight-or-flight response kick in, our blood pressure ramps up into overdrive, those gnarly chemicals that make us feel at once hot and cold as the reptilian brain takes over and rational thought goes bye-bye. Everything in our bodies and minds is screaming “Bad! Bad! Bad!” And even after the initial shock begins to fade, we may still be eager to kick ass and take names even as we’re wanting to curl up in a ball and cry, or else hide from our fear with the numbing balm of social media, wine, and chocolate.

What’s next? How are we supposed to proceed from there if it feels like half the world is going low and rather than get high, we want to “go high”?

“Holding on to anger is like grasping a hot coal with the intent of throwing it at someone else; you are the one who gets burned.”

As always when I’m lost and bereft, I look to improvisation for guidance. Ever helpful, improvisation offers two useful directions in this situation. The first is to seek the practice of Non-judgment, which to me means accepting the reality of the moment as it is, rather than how we wish it would be. The second useful direction is to practice the kissin' cousin muscles of Agreement and Acceptance, which I define as the act of moving forward together given the present reality.

Improvisers get to strengthen the muscles of Non-judgment, Acceptance, and Agreement quite often in our scenework. We’re doing a scene and our scene partner comes in and “fucks it up” by saying something we might consider annoying or the result of poor listening or that takes the scene where we didn’t want to go. You know that feeling, I’m sure.  You initiate a scene, and someone comes on and responds in a way that makes you have this feeling of disappointment. Maybe you even sigh. Maybe you feel a wave of anger or annoyance. It happens. It will happen again. Now what? How to continue the scene while still seeking ease and joy?

That’s when I evoke the story I’ve taken to calling “The Parable of Dave Razowsky’s Foot.” I call it a parable because I’ve told the story so many times in my own way and according to my own interpretation that it’s no doubt ceased to be the story I heard improv teach extraordinaire Dave Razowsky tell on a podcast years ago. That’s my way of saying that the story I’m about to tell you now is my own version and is not the way it really went down. Here is how I tell “The Parable of Dave Razowksy’s Foot:”

Once upon a time, Dave Razowsky was at a wedding reception dancing with a woman. In my imagination, the woman is quite large, like an Amazon in pink chiffon. So excited was this lovely Amazon at the prospect of dancing with Dave Razowsky, that she placed her two meaty paws upon his shoulders in delight, and slammed him to the ground in mislaid enthusiasm. Unaware of her impending Amazonian fervor, Dave Razowsky’s foot found itself at an angle, so when it had its unhappy encounter with the hard ground, Dave Razowsky’s foot ended up breaking very badly.

And in that moment, Dave Razowksy says he thought, “That just happened.”

Not “Holy fuck, you Amazon she-bitch, what have you done?! You fucking broke my fucking foot!”

Not even, “Aaaaaaaah! My foot! It’s broken! Ooooooowwwww!” 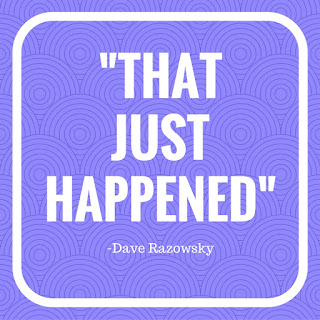 The foot breaking was an event. The “holy fuck!” is the judgment. And according to the parable, Dave Razowsky was able to remain in the event. On one hand, that event in my parable had many bad outcomes: Dave Razowsky was unable to work for quite some time. He couldn’t do his shopping.  He was stuck at home for 6-8 weeks. But the event also had positive outcomes: Dave Razowksy had time for projects he wouldn’t have had time for otherwise. He had opportunities to sit and be present and think and imagine, which lead to more opportunities for productive growth. He found out who his real friends were, the ones he could count on, the ones who actually did his shopping for him and took him to the foot bone doctor and sat around with him and made him laugh while his foot healed. (Again, these outcomes are for parable purposes only and may not be what actually happened in real life to the real Dave Razowsky, who is a swell guy with a fully functioning foot.)

“That just happened.” Which means accepting the reality of the moment in a place of non-judgment. The Amazon slammed him to the ground and his foot was broken. Your scene partner just came in and responded to your offer. The election did not turn out the way I had fervently hoped. Now what?

First, the improv guideposts of Non-Judgment, Agreement, and Acceptance help us practice accepting the present reality as it is rather than how we wish it would be. No amount of denial, bargaining, chest-beating would unbreak the foot, change the offer, alter the election. It happened.

Personally, I can’t always jump straight to “That just happened.” Because I am a paint-still-drying, evolving human, I find that I often have to go through a state of negative emotion before I can get to accepting the shit sandwich of reality. (Yes, “shit sandwich” is a judgment. See? “The just happened” is a practice. Sometimes, I get there. Sometimes I don’t.) Usually, I have to feel sad/mad/disappointment/grief for a proportional period of time before I can claw my way to the judgment-free acceptance of “That just happened.” Still, I can use this parable as an intention to move towards because accepting the reality of the moment is necessary in order to find the most ease and joy of reality.

Once acceptance happens, we can move forward. That’s the next step: Given the reality of what just happened, how can we now move forward together?

I don’t have to deny that I’m unhappy about the current reality, but improvisation demands us to accept it and move forward together. Inspired by a Del Close quote, I describe the act of building a scene with this full-hearted acceptance as being like building a life raft together while we’re in it.

My litmus test of Agreement is “Does this offer add to our life raft?” If it does, great. If not, that move probably wasn’t an act of agreement and wasn’t helpful in moving us forward together. Ideally, we’re in a scene together constantly adding little pieces to our life raft as we glide easefully down the stream. If all goes well, by the time we leave the stage, the ground under us is solid, steady, and leak-free. 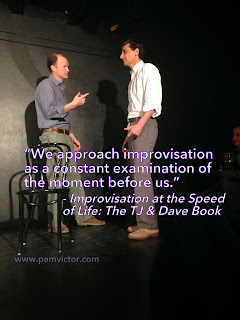 Applying this offstage, when we find ourselves in the clusterfuck of life, we may find it most helpful to get to a place of non-judgment acceptance – That just happened – where we cease resisting reality, so we can then figure out how we can move forward together. How can we build a life raft together with the maximum joy and ease? That means, I can’t argue with my  “scene partners” in life about what they’re bringing to the moment. I have to figure out how I can build onto what they’re bringing to the moment so hopefully we don’t all die in a fiery blaze of shitfire.

Now how can we move forward together?

“When it is obvious that the goals cannot be reached, don't adjust the goals. Adjust the action steps.”- Confucius

I don’t claim to yet have the answer for you, but I hope you find it useful to ask the question. Then pay attention like a ninja-detective, so you don’t miss the next step when it appears.

If you are interested in exploring some
more Zen of Improv pieces,
you might enjoy reading a bit more about this topic in
Letting Go of the Judgmental Bitch. 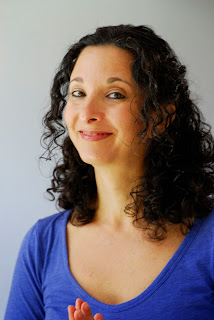 Pam Victor is an improv comedian, author, teacher, consultant, and nice person. She is the founder and Head of Happiness of Happier Valley Comedy, the heart of improv in Western Mass, where Pam teaches The Zen of Improv to the best students in the world as well as bringing the power of improvisation to the workplace in her "Through Laughter" program.  TJ Jagodowski,  David Pasquesi, and Pam are the co-authors of "Improvisation at the Speed of Life: The TJ and Dave Book."   She lives online at www.pamvictor.com.