by Pam Victor
[The Zen of Improv is a series of articles about
the place where improvisation and Zen thinking meet.
You can find all the pieces here.]


For a long time, I was confused about the amount of modesty I encountered when talking to my improv heroes. I expected them to sit high on the thrones I put them on, laugh haughtily, and expound confidently in a deep baritone, “This is the way I improvise and you should too.” Instead, I encounter profound humility almost everywhere I turn, most of all from our most admired improvisers. (With one notable exception, which I’ll happily dish the dirt about if you ever have the opportunity to buy me a margarita or slice of pie.)

In the improv mecca of Chicago, I find this humble nature the most striking of all. For instance, improv goddess Susan Messing said to me, “I think my joy is that I haven't been kicked offstage yet ... and that people I play with would agree to play with me.” Susan Messing has said some pretty eyebrow-raising thing - bless her heart - but that someone of her stature would say something like that shocked the hell out of me.

And when I geeked out with TJ Jagdowski of TJ & Dave, we had this exchange:

PAM: After all this time, do you feel sometimes that you suck?

TJ: Yeah. Oh, yeah. And a lot of people that I think are really good would maybe be at a point in their craft where they don’t suck anymore. And I know they feel like they suck. Dave feels like he sucks sometimes … You never get passed blowing it.

PAM: I think you’re perception of not achieving is probably different than mine or the audiences.

TJ: No, this is objective sucking...

PAM: I’ve seen you perform a lot since I’ve been [in Chicago]-

TJ: I haven’t sucked in front of you?

PAM: You haven’t sucked in front of me.

PAM: Could happen at any minute.

TJ: Any time. I reserve the right for that to end at any time …

While writing Improvisation at the Speed of Life with TJ and Dave, I quickly discovered that a good way of getting their hackles up was to call them masters of improvisation. “We are not masters and we never will be,” David told me firmly.

At first I thought this modesty might be good ol’ Midwestern “Aw, shucks” charm. But then I started wondering if their mindset wasn’t a Great Lakes aberration but rather a necessary component of improvising skillfully for decades on end. That’s when I started to see improvisation as a practice rather than a final product. We’re always practicing, never mastering. Always beginning, never taking home the trophy.

What is this apparent humility so common in great improvisers?

Secondly, improvising well is nothing we can ever take for granted. The very nature of improvisation requires that every time we take the stage, anything can happen, including major "objective sucking." The shit-show is inevitable, and, in my experience, the best way to attract the shit-show is by thinking I’m immune to it. And the most experienced improvisers carry the most scars of moments that fall flat, stone cold audiences, and shows that felt like performing in a vat of mud. Maybe it’s the roll-of-the-dice element and inherent service of improvisation that prompt our most talented and experienced performers to maintain the Zen concept of “beginner’s mind?” Ironically, this mindset may be just the thing that makes them great performers.

You only have to venture as far as the prologue of Zen Mind, Beginner’s Mind where Shunryu Suzuki writes, “For a while you will keep your beginner’s mind, but if you continue to practice one, two, three years or more, although you may improve some, you are liable to lose the limitless meaning of original mind … This does not mean a closed mind, but actually an empty mind and a ready mind. If your mind is empty, it is always ready for anything; it is open to everything. In the beginner’s mind there are many possibilities; in the expert’s mind there are few." 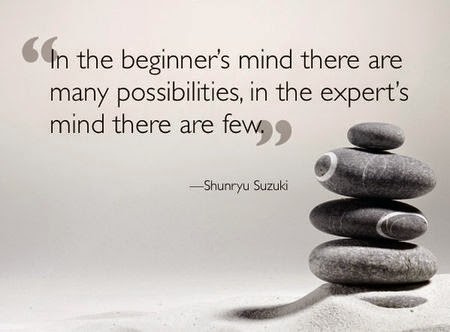 As I understand it, "beginner's mind" is about staying open to new ideas, taking risks, living in a state of not-knowing, being curious, eager, and ready. With a beginner’s mind, everything is new and interesting and accepted. Think of when you started driving. Every moment was mindful. Every movement was conscious. Personally, I couldn’t even listen to the radio at first because the act of driving itself took all my concentration. A beginner is on high alert, trying to see everything, absorb everything, and improve constantly. And these days? Most often, I pull into my destination without one clear memory of the entire drive. Terrifying but true. And probably not the best way to perform as a driver. If you see me on the road, steer clear.

I’ve been wondering lately how the idea of beginner’s mind translates directly to the stage. For starters, I replaced “zazen” with “improv” when I read this:


The most important thing is to forget all gaining ideas, all dualistic ideas. In other words, just practice zazen in a certain posture. Do not think about anything. Just remain on your cushion without expecting anything. Then eventually you will resume your own true nature. That is to say, your own true nature resumes itself.”

I translate that to: Just remain in the scene without expecting anything in order to discover our most honest reactions. A lot of times, the more practice we have, the farther away we get from the honest curiosity and openness of our beginner’s mind. I remember a conversation I had with TJ once about how to figure out what was a truly honest response in a scene, and I mentioned using my “improviser instincts.” He castigated me, saying that if I’ve had so many improv classes that I had forgotten my natural, honest human instincts and react only according to my improviser training, then I’ve taken too many improv classes.  (Note: I scaled back on the workshops and classes immediately.)

But you know what I’m talking about when I say "improviser instincts," right? We’ve been through so many scenes that we can classify them and play them out automatically – “Oh, he’s playing the guy in the office who sees everything in superhero terms. All I have to do is put myself in jeopardy, so he can have something to save. ‘Ah! I’m being swallowed up by the copier! Help me!’” After a while onstage, heightening and pattern-playing become muscle memory, and we stop seeing the limitless possibilities of the scene. “In the beginner’s mind there are many possibilities; in the expert’s mind there are few.” Maybe that’s what worries those stellar improvisers so much?

Habit – of raising stakes, playing patterns, establishing the who/what/where, or whatever - turns off the beginner’s mind. In the unfortunately titled Breathe, You are Alive! Thich Nhat Hanh writes, “But our habit energy is so strong. That is why we need each other in order to stop and establish ourselves in the present moment ... Every time the runaway horse of habit energy shows its head, pushing us on, we breathe in and out and say, ‘My dear friend, I know you, the habit energy of running.’ We smile to it, and it is not able to push us any more. It will go away ... We don’t have to fight. All we have to do is recognize it and smile to it.”

But to be perfectly frank, sometimes I don’t feel like doing all that breathing in-breathing out mumbo-jumbo. I don’t want to have to sit crisscross-applesauce on a cushion to get my improv on, but I’d still like to get the benefits of "beginner’s mind." So I guess I have to recognize my habits and tell them to fuck off smile at them? Onstage that could mean being curious about where the scene is going rather than mapping it out in my head according to an “arc” or by “following the funny.” Quieting myself and really listening to the scene taking place already rather than sliding into the well-worn path. Taking risks because I don’t know where they will lead rather than following some formula of “How to Improvise.” In order to improvise into the multitude of unknown places that scene could go, I need to let go of those improviser instincts and that habit energy and instead shine the light on my human instincts. The beginner’s mind says, “I don’t know what’s going to happen! Yay!” and “I wonder what is going to happen next?” and, most importantly, “I have to pay attention to my scene partners to discover what’s going to happen next,” which all seem like a much more fun way to play anyway. And definitely would make me a more fun person to play with in the long run.

Every time I get onstage is an opportunity to practice “beginner’s mind.”

Lucky beginning improvisers, they can skip that practice and just be.


“Everything is perfect and there is always room for improvement.”

If you are interested in exploring some more Zen of Improv pieces,
check out
The Great Spirit of "Fuck It!"

Or how about some of these "Geeking Out with..." interviews?
Like the one where David Razoswky says,
"Be present as much as you can. Take in as much as you can as often as you can. Be patient and know that every time you stop seeing, you start thinking. Let yourself be surprised at being surprised."

Or maybe you're interested in getting the inside skinny on my experiences writing a book with my improv heroes?
The series Writing The TJ & Dave book starts here.
*