The Zen of Improv: Letting Go of the Judgmental Bitch (Non-Judgment in Improv, Part Three)

[The Zen of Improv is a series of articles about  the mind-expanding, groovy side of improvisation and other hippy shit.
You can find all the pieces here.]

I was a super judgmental bitch during the first ten years I improvised. I judged my teammates and myself with equal vigor. Though I thought I was judging us in order to assess our work and get us to a more evolved place, ultimately my judgment was not always helpful to achieving that goal. I tried not to be such a judgmental bitch, but it’s really hard for me to let go. Until the day Charna Halpern, co-founder of iO Theater, screwed my head on a little tighter …


CHARNA: Who wants to work with an asshole who says, “NO, my idea is better”?


PAM: But, c'mon Charna. We don't all work with Brian Stack and [Kevin] Dorff. Chances are, we're going to play with some duds now and then. It's hard to imagine them as geniuses.


CHARNA: Look at someone like TJ [Jagodowski.] I’ve seen him take people from the audience and play with them. Tara DeFrancisco takes brand new students who have no skills at all and makes them brilliant. Everything is used and everything works. “Judge not lest ye be judged.” (Oops, God just took over the keyboard for a second. I apologize.)


And even if someone isn’t brilliant that night, even if someone comes up with a lame idea by accident because they are totally blocked, let's not forget we also get laughs by agreement. So when the other player takes that lame idea and agrees - and commits to using it - the audience howls ...


PAM: … My next question is, what is the interplay between judgment and assessment? We are not supposed to judge ourselves or others on stage, but does that extend to after the show too? What role does assessment play, of our own work and the work of others, in improv?


CHARNA: I definitely think folks can and should talk after a show to assess what went well and what went wrong. Absolutely. But keep in mind, it’s all in the semantics. You can say something to let someone know what you meant to do and not come off ACCUSATORY. It’s important to talk about what worked and what didn’t work and why, so you can work on the problem next time.

"If you judge people, you have no time to love them.”


The same applies to life, of course. If we judge our work while we’re working, we’re not really working, are we? If we believe that we buy the Evil Mind Meanies' catchphrase of "I suck/you suck/he sucks/she sucks/we suck/they suck," we’re failing before we’ve even given it a fair shot. I’ve seen a lot of people cut themselves off at the knees by buying into the Evil Mind Meanies' bullshit, and then giving up or self-sabotaging their efforts in some sadly validating attempt to prove that they really do suck after all and they’re not deserving of success. "I was right! I suck!" You guys, I have to tell you something: THE EVIL MIND MEANIES ARE BIG, FUCKING, LIAR-LIAR-PANTS-ON-FIRE, STUPIDHEAD LIARS!

(The previous was not a quote from Mother Teresa, by the way. Just needed to clarify that point.)

Even if you choose to believe that you are not worthy of success and unlimited joy (Though I think you are!!! You so are!!!), don’t you think it’s worth at least giving it a fair shot? Sure, you risk failure/humiliation/lots o’ crappy stuff; but if you don’t even really give it a fair shot, you’re already failing/humiliating yourself/sitting in a lots o' crappy stuff stew of your own making. Plus as I mentioned in the last post on non-judgment, we don’t know until the show (or life) is over if something really was a “failure.” If a shitty moment leads to a positive one, is it really a failure?

So what's a gal to do when those Evil Mind Meanies start up their “I suck, you suck, we suck, they suck” chorus? It is my understanding that Zen thinking would suggest that I open my eyes (and ears and heart) and notice the moment I’m in.

In Zen Mind, Beginner’s Mind, Shunryu Suzuki wrote, “Our practice cannot be perfect, but without being discouraged by this, we should continue it. This is the secret of practice.” From what I gather by applying his writings to improvisation, it seems that by always judging and trying to “get better” during my Judgmental Bitch Decade, I always was working towards some goal ahead and living in the future. Once I succeeded in attaining that goal, I would just set another one - but never succeeding to live in the present moment. “Because your attainment is always ahead, you will always be sacrificing yourself now for some ideal in the future. You end up with nothing.” Suzuki counsels, “So as long as you continue your practice, you are quite safe … “ 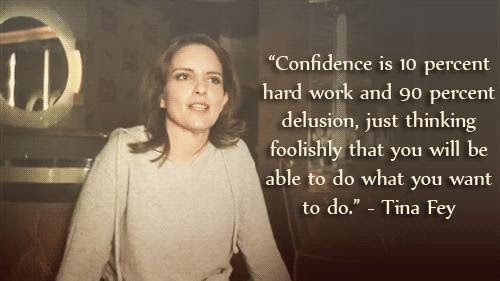 And Tina Fey, Queen Goddess of Comedy, is said to have said, “Confidence is 10% hard work and 90% delusion.” Fake it until you make it, bitches. Instead of buying into the Evil Mind Meanies' song of suckitude, believe the delusion that you're capable of ANYTHING. Or better yet, I suspect I’m not supposed to delude myself into believing that I don’t suck, but just let go of the judgmental bitch mind all together. (My next book will be called Zen Mind, Judgmental Bitch Mind, soon to be made into a movie staring Tina Fey me ... because I'm capable of anything!) Who knows how this all is going to work out? Who knows how events will stack up through the rearview mirror? Only fortunetellers and my cat. (My cat is psychic.) I guess the only thing to do is bitchslap the Evil Mind Meanies, and carry on. (Make that into a t-shirt. Donate the profits to an animal shelter.)

If you don’t mind, I need to re-absorb Suzuki’s words: “So as long as you continue your practice, you are quite safe …" In improv, I was taught by TJ and Dave that "the practice" is the focus on the scene at hand. Listening and reacting honestly to the moment. If I could improvise like I breathe, always in the present, I’d be safe.

Ironically, the present moment is the REAL Golden Time. (Someone should tell Joe Bill … although I suspect he knows already.) We need to stay in the present to be of best service to the scene and our scene partners. How can we stay in the present? Listen with our ears, eyes, hearts, and gut. Pay attention. Take a moment to breathe. And have faith that it all will be fine.

Or how about some of these "Geeking Out with..." interviews?
Like the one when Dave Pasquesi and I have this exchange:

PAM: Much ado has been made, in certain circles, about that “First Moment” in a TJ and Dave show, the one when you look at each other and gracefully step into your characters. Do you ever look at TJ and think, “Oh crap. I got nothing”?