The Zen of Improv: Curiosity Killed the Crap Scene

[The Zen of Improv is a series of articles about the mind-expanding, groovy side of improvisation and other hippy shit.
You can find all the pieces here.]

And behind all of these dos and don’ts is the big granddaddy of them all: Don’t be afraid. Fear kills every great scene. Fear that I’m going to fail. Fear that I’ll humiliate myself. Fear that I’ll piss off my scene partners. Fear of being too "in my head." Fear of not being in control. Fear of trusting my scene partners. Fear of doing a shitty scene and everyone will hate me and I’ll get cut from the team and nobody will ever want to play with me and I’ll never get to improvise again … and … and … and …

I think we can all agree that fear is where good improv scenes go to die. But how do you stop being afraid? I don’t know about you but the command “Don’t be afraid” only bounces off me like a rubber ball. It’s fun to contemplate the "Don't be afraid" ball whooshing towards my gut, but, like other “don’ts,” it doesn’t stick. Bonk!, boing, boing, boing, it bounces off and bumps along on its little rubber ball way. Hell, if I could just stop feeling something through sheer desire and will, you can bet your ass that right now I would instantly stop feeling afraid and ashamed and regretful and longing and grief and a whole jackpot of other horrible feelings. But, hey, maybe you’re a better person than I? Maybe “Don’t be afraid” makes you stop being afraid? If so, then Congratufuckinglations! There is no reason for you to read any further. Go forth and improvise in greatness! Love and peace be with you.


"I think, at a child's birth,
if a mother could ask a fairy godmother
to endow it with the most useful gift,
that gift should be curiosity."

Eleanor was no Zen master, as far as I know, but Curiosity seems like it would be a good wide-thinking idea. So lately, I’ve been experimenting with simply feeling curious about what it would be like if fear – or any unwanted thought habit - wasn’t a part of my work. Instead of wishing glumly for things to be different, I’m trying to be CURIOUS about what it would be like if things were different. And that's all. All I'm trying to do is think about being curious. So rather than, “Don’t be afraid of doing a shit show tonight,” I’ve been trying to think, “I wonder what it would feel like not to be afraid of doing a shit show tonight?” What would it be like to improvise with a simple sense of wonder as my guiding force? What would it be like to be curious onstage? I wonder what is going to happen next? If curiosity killed the cat, then in this case the cat would be the thoughts and habits that impede becoming the best improviser I can be. Those thoughts and habits are a bad cat. It's the cat that lets you pet it, its purring relaxing you into a daydream, then suddenly bites the shit out of your hand. Bad, bad cat.

Maybe at my next show, I'll just pick one of those questions up there or make up some other moment of curiosity. Instead of being bossy with that stubborn toddler of Fear inside  – Do that. Don’t do that! -  I wonder what would it be like to simply be curious about a show without Fear? I wonder what it would be like to let go and trust that it will all be okay?


That’s some terrifying shit. But I have to admit, I’m a little hot-stove curious about it. 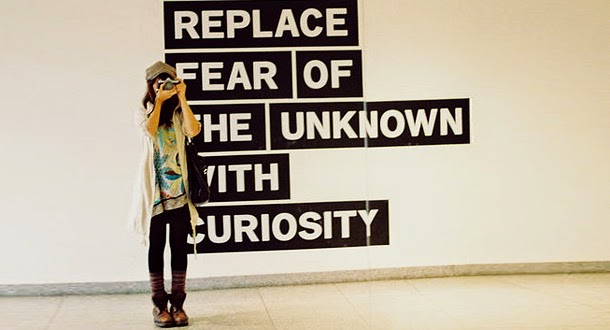 And check out  some of these "Geeking Out with..." interviews
in which I get to geek out with a big thinking in the improv world.