The Zen of Improv: The Hardest Easiest Work (Part One)

[The Zen of Improv is a series of articles about
the place where improvisation and Zen thinking meet.
You can find all the pieces here.]

When my student asked me this question, I instantly knew I didn't have a pithy answer that would satisfy her. And the kick in the ass is that the only answer I have is one I barely understand. Because as far as I can tell, the only answer to how to try to be a better improviser is not to try to be a better improviser. Not to do. In fact, to actively (Hello, irony!) not-do. 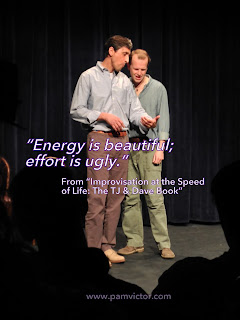 But the basic take-away I gleaned from my time with TJ and David is that the show is just fine as it is and any effort we put forth will only fuck it up. We can’t TRY to be funnier. We can’t TRY to be better listeners. We can’t TRY to be more skilled improvisers. Any trying we do ends up looking clunky and unseemly to the audience. Instead, the idea is to approach improvisation as an act of non-doing. Which is different than not doing anything. It’s about being fully present in the moment unfolding gloriously onstage. It's about opening ourselves to improvising well. It’s about not trying. I guess, it’s about just being.

If you'll patiently entertain the following woo-woo moment, we’ll leave TJ and Dave for the Taoists (or Daoists) and their concept of non-doing (Wu wei), which is "the action of non-action." (Excuse me while I probably blunder this explanation because it’s a pretty fucking big concept.) Non-doing involves the effortless doing, which you cannot try to pursue. Like many high school students before me, to understand this concept I turned to the simplicity of Wikipedia, which summarizes Laozi's explanation of non-doing in the Tao te Ching, "beings (or phenomena) that are wholly in harmony ... behave in a completely natural, uncontrived way. The goal of spiritual practice for the human being is, according to Laozi, the attainment of this purely natural way of behaving, as when the planets revolve around the sun. The planets effortlessly do this revolving without any sort of control, force, or attempt to revolve themselves, instead engaging in effortless and spontaneous movement."

Go ahead and replace "spiritual" with "improvisation" (and I guess you should take out "Laozi" because I'm pretty sure there isn't anything about improv comedy in the Tao te Ching). Ok, now re-read. And weep. Because the goal of this type of improvisation is to perform in a purely natural way and behave in a completely uncontrived way without trying to control or force the scene. Playing in total harmony. Improvising effortlessly and spontaneously. "One way to approach this concept," according to the wu wei wisdom of Wikipedia, "is by eliminating unnecessary action, and doing what merely needs to be done." A dog trick as massive and elegant and simple as the planets revolving around the sun or a heart beating or a daisy blossoming.

Because to try to improvise, I have to not try. And in order to do that, I have to decrease the stuff that pushes me into trying too much, like fear that what I have already isn't enough. In order to train improvisers who will become more wu wei capable than I, the big message that try to impart to my students is we all are enough. YOU ARE ENOUGH. You have exactly what you need already the minute you step onstage (and in the room and into the universe). To hit the wu wei sweet-spot, we have to get on board with the idea that we have enough to improvise well right this moment without trying to do anything. In some ways, that's a no-brainer because I know for a fact that you, dear reader, are a unique person. You have some crazy-ass, true stories and compelling life experiences. You are pretty damn entertaining just telling your own truth. Your uniqueness makes you interesting to me (and the audience) by just being you. In the words of people far, far wiser than I, "There is nothing funnier than the truth" (Charna Halpern and Del Close, Truth in Comedy).

If you buy that this wu wei stuff, then you don't need to take the stage with a toolbox of clever jokes or kooky characters or ha-ha-hi-larious premises. At our most natural and effortless, we each bring enough to the stage to happily improvise successfully, even (maybe especially) when we're onstage folding sheets or lying on the beach or chatting across the back fence. In some ways, the hardest job is to trust in ourselves and each other that we already have everything we need to improvise well. And to trust in improvisation. Wu wei. Wooooo wheeee!

Here is Part Two of
The Zen of Improv: The Hardest Easiest Work

Or how about some of these "Geeking Out with..." interviews?
Like the one with Mr. Pasquesi where he says
"Improvisation is itself an exercise in faith.
In faith of Improvisation.
That if I do the next tiny thing, all will be fine."


Unless you're a meanie, Pam would probably like you.