An uncomfortable amount of death permeated my life last summer.  I witnessed the “good” death process of my Uncle Steve, who passed away after a fully realized, abundant 85 years on this planet. Though we would have liked more time with him, we are grateful for the time we had. And I now know what an affirming, restorative funeral feels like.

But I also know that smart, respectful, loving, sober, 19-year-old girls can die while driving south on 116 across from Bub’s BBQ at 6:30pm, and that is a hideous thing Too Unfair to rest your mind on any longer than you possibly have to. Inconceivable. Horrific. Heartbreaking.

Finally, I know what it is like to watch children attend their mother’s funeral. If I were in charge of the Universe, this would never happen. I don’t care about yin and yang, the balance of the Universe, and all that shit. It’s not Right, and it shouldn’t happen. No exceptions. Period.

As a result of this sadly gained, new knowledge, I’ve been thinking a lot about my own funeral. It’s a hard thing to talk about because you don’t want to jinx things or create a misunderstanding with the Universe that you are inviting death. So let me clearly state, I don’t want to die any time soon.

Is this mic on? Ok, good. If you are listening, Universe, I would like my great-grandchildren to attend my funeral.

If you are still listening, I would like to perform comedy more often with people I love and admire who love and admire me. Oh, and I don’t want to be greedy but while I have your ear, so to speak, I also would like Michael Franti to sing to me and 30 of my closest friends on a tropical beach. (There are other things I would like to do with Michael Franti, but this doesn’t seem to be an appropriate venue. We can speak again privately, Universe. Thank you.) Oh, shit. Was the mic still on for that last part? Dammit.

As a writer, it seems fitting that I should write out my wishes, and particularly apt at this virtually social-rich time in my life, that they should be published on my blog which you may read by way of my Facebook page.  Live by the status update, die by status update. Speaking of which, if there is still social media at my passing, my final status update should be a recycled post of an oldie but goodie like this one: “Sometimes I like to walk around naked with shoes on. It makes me feel like a fat, old Slavic woman in a rundown Russian bath house.”

As far as the technical wishes for disposing of my post-Pam body, I absolutely do NOT want to take up any space on this Earth where a tree could be planted instead. I don’t really believe that a person lives in or around their physical body after death; so beyond the aforementioned primary wish, my immediate family should do with my remains whatever feels best for them. Cremation is fine. One of those new-fangled “green” burials that I saw on Six Feet Under would be okay too. I don’t care. If you would like to spread my ashes and plant a new perennial flower garden over them somewhere in the country in Massachusetts, that works. If you care to carry them around in a purple and blue vase, it’s your call. Whatever feels good to you. That’s not where I’ll be.

Where will I be after death? If all goes according to plan, I will be in kittens and laughter. Kittens are Pure Joy in a soft, furry form. I could totally get into spending eternity sending Light through kitten pounces, snuggles, tiny mews, and those ridiculously big saucer blinky-blink eyes. But mostly, if I get my wish, I’ll be in laughter. Preferably in laughing about something I’ve said or something stupid I did, but failing that opportunity I’ll hang out in laughing about something stupid you said or did. I’ll live in laughter at off-color jokes, preferably of the penis-vagina persuasion, (less so in puns and knock-knock jokes). If you want me to live on, play with kittens and laugh at least once day but hopefully much more than that.

Which brings me to my funeral…

I understand the need to boo-hoo and mourn. It is cathartic and important. Tell stories, sing songs, and do whatever you need to express sadness. But then you must laugh at my funeral. Please laugh. And laugh a lot. Tell funny stories. Improvise. Do your best five-minutes. It doesn’t necessarily have to be about me. Just laugh. I also would like to request that at least one person tell a completely distasteful joke or story of epically improper proportions. No need to go all the way to The Aristocrats level, but go ahead and aim in that direction. Say “fuck” a lot. Be inappropriate. Take off the filter. After my funeral, you simultaneously should feel spiritually cleansed but also like you may need to take a shower.

I think it would be nice if you get the local animal shelter to bring over some kittens and cats that most need to be adopted. No pressure to take one home right away. But in my experience, it’s almost impossible to be inconsolably sad in the presence of a kitten. If a few kittens and, more importantly, adult cats find good homes at my funeral, well, that would rock really, really hard. I would love that so much, you guys. I really would.

Lastly, I would like the service to conclude with a very loud playing of Michael Franti’s “Say Hey (I Love You).” It’s not my favorite song (Jerry Garcia’s rendition of “Dear Prudence” might be my favorite song, but I also love McCartney’s “Blackbird,” plus obviously pretty much everything by Michael Franti…), but I think “Say Hey” is best suited for the message I’d like to send. People have asked me if I’d like Mr. Franti himself to play at my funeral, and the answer is a resounding “Fuckity fuck NO WAY.” I would be really fucking pissed if you guys got to hear him in person without me there. And fuck you because it doesn’t count that I’d be there in spirit. If I can’t hug him with our very-much-alive, warm, ganja-scented bodies pressed tightly against each other, I don’t. want. him. there. I hope we’re clear on that ‘cause I’d fucking haunt your ass otherwise. 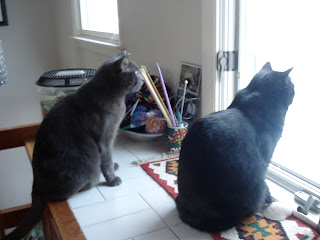 Email ThisBlogThis!Share to TwitterShare to FacebookShare to Pinterest
Labels: Essay: My Funeral, Essays