Quickie: A Mere Hour or Two of Self-Control

My improv comedy troupe was doing a show with The Rainbow Players, a troupe of differently-abled adults. We all are having much fun playing together – those guys are so funny. In the middle of their set, two women with fairly significant cognitive disabilities go gallivanting off the stage, bee-lining it down the aisle to the back of the room where some of their peeps were watching the show.

“Did you see us on stage? Did you see us? Did you see us?” They pepper their companions with unabashed enthusiasm and joy. “I was funny, right? Did you hear everybody laughing? Everybody was laughing! Did you hear them laughing? Did you see us on stage? Did you? Did you?”
Their pleasure is as entertaining as the official comedy show still being performed on stage. Because I recognize their sentiment. I know exactly how they felt. I have felt exactly that same way. I do exactly the same thing to my husband, though I save it until we get home after a show. A mere hour or two more self-control is all I have over those women. And barely that.
“How do you think the show went, honey? What was your favorite part? What did you did you think about that scene in the shower? Could you tell I didn’t know what the heck I was going to say next or did I cover it well enough?” I mercilessly pound my husband with questions.
But really all I’m saying is, “Did you see me on stage? Did you see how much everyone was laughing? Was I funny? Did you think I was funny? Did you? Did you?”
So then my poor husband and I go through our post-show routine where I inundate him with questions and he claims not to remember anything specific. Until finally I get completely frustrated with him, abandon all hopes of striking gold, and call my comedy partner Laura.
That conversation has taken on a bit of a routine as well.
“What did your wife think of the show?” I’ll ask Laura. 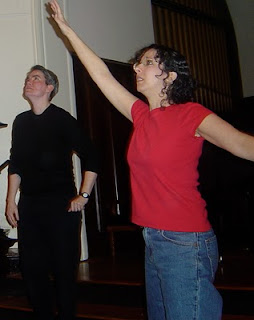 “She claims not to remember anything specific,” Laura sighs. “What about your husband?”
“Same,” I moan. “What a bunch of losers.” (I’m pretending to talk about our spouses.)
Pause.
“We were really funny tonight,” she finally says.
“Yeah? You think so? You think we were funny? Did you? Did you?” I ask with unabashed enthusiasm and joy.
“Totally.”
Aaaah. Now was that so much to ask?
Posted by Unknown

Email ThisBlogThis!Share to TwitterShare to FacebookShare to Pinterest
Labels: Quickie: A Mere Hour or Two of Self-Control, Quickies