Essay: Stand on Your Own Two Feet and Scratch Your Balls, Ladies 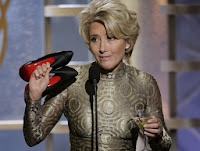 "I just want you to know,” said a brassy Emma Thompson as she aimed pointedly at the bottom of her Louboutin shoes while onstage at the Golden Globes, “This red, it's my blood.”

I gots to love me some Emma Thompson, now more than ever, because she perfectly captured my needling annoyance at the fashion competition portion of Sunday night’s Golden Globe awards. WHAT THE FUCK IS UP WITH THE FUCKING HIGH HEEL SHOES, LADIES???

I felt the first poke during the red carpet promenade as E! Entertainment interviewed Tina and Amy. If I had been in their position, a few minutes before show time, I would have been holed up in the bathroom with a stench more robustly defensive than a Do Not Disturb sign and triple Master bolt locks. But there they were - Tina Fey and Amy Poehler! - and those two women were charming and relaxed and oh-so-funny, even trussed up in their awards ceremony finest. Then as it was time to leave, Tina Fey balked at the steps. “I need help,” eeked one of the most powerful people at the Golden Globes. Her shoes were too high and she couldn’t see her feet because of her very beautiful and effusive dress. There she was, Tina-fucking-Fey, Leader of the Free Comic World, and she couldn’t manage seven steps without being on the arm of a man.

The next prick of annoyance (no pun intended) came when I noticed how comfortable the men looked at the Golden Globes. There they were, walking squarely down the red carpet while the women teetered and minced precariously. The body language of the men said, “I belong here. I own this place. Fuck you, motherfucker, yeah.” While women’s body language read, “I can only allow myself to be here if I walk this tightrope. Sorry.” It’s no wonder that when winning the awards, many of our most influential women in entertainment took the stage breathless, out of touch with their true selves, and looked likely to blow off the stage with a stiff breeze. While most of the dudes were standing up there on stage as comfortable as if they were wearing sweatpants, with their hands in their pockets, leaning back on their heels, at ease enough to scratch their balls while they thanked their agents.

And, hells no!, I’m not saying high heels are a male-imposed torture device to keep women in their place. This situation is all on you, ladies. Tina Fey chose her shoes on her own volition. And that irks me more. Why give up your power, women? She and Amy Poehler are queens of the comedy world right now. My daughter watched the show with me expressly to watch “Tina and Amy,” which only made my heart sink further to watch my 15-year-old daughter swallowing with delight the message that even the most powerful women in entertainment don’t have the ability to walk down a short flight of red-carpeted stairs on their own two feet.

And all I can say is, Fuck that.

I want to see my leaders standing firmly on their own two feet. Look, I can’t own the comedy world right now, but I sure can cheer on Tina Fey and Amy Poehler. They walk in the steps of Lucille Ball, Mary Tyler Moore, and Roseanne Barr. Instead of waiting around to be hired, they run the whole fucking show. So I don’t want to see the most powerful women in the comedy world teetering about like Japanese women with bound, three inch long “lotus feet.” With all due respect Ms. Fey and Ms. Poehler, I want to see you fuckin’ stand on your own two feet and scratch your balls, ladies. Please for those of us who don’t have the authority that you do, for our daughters and our sons, please choose power over fashion.

I’ll leave you again with the wise words of Emma Thompson, as reported by Vanity Fair from last month’s National Board of Review gala, “I’ve taken my heels off as a feminist statement really, because why do we wear them? They’re so painful. And pointless, really. You know, I really would like to urge everyone to stop it. Just stop it. Don’t wear them anymore. You just can’t walk in them, and I’m so comfortable now.”

I'll just leave these photos of
these strong and powerful women here,
if you don't mind:

Pam Victor writes "Geeking Out with...," the popular comedy interview series. She is the founding member of The Ha-Ha’s, and she produces The Happier Valley Comedy Show in western Massachusetts. Pam directed, produced and performed in the comic soap opera web series "Silent H, Deadly H." Pam also writes mostly humorous, mostly true essays and reviews of books, movies, and tea on her blog, "My Nephew is a Poodle." You can see all her shit at www.pamvictor.com.

Email ThisBlogThis!Share to TwitterShare to FacebookShare to Pinterest
Labels: Essay: Stand on Your Own Two Feet and Scratch Your Balls Ladies, Essays