Yes, a double feature, which is basically as unusual as a double rainbow in my world but rarer, like a double rainbow with a friendly leprechaun who, with a sly smile and a between-you-and-me wink, willingly hands over his pot of gold. It was six o’clock and both kids were at a friend’s house for the evening, so my husband and I decided to get Indian food and watch a movie. Big night in our house! Woohoo! 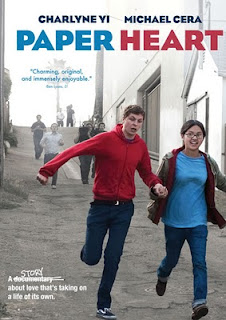 We scanned what was streaming on Netflix and settled with Paper Heart, a romantic comedy sort of-documentary with a comedian named Charlyne Yi  and the guy from Juno (Michael Cera).  The premise is that Yi isn't sure she believes in love or that she’ll ever fall in love. She's trying to figure out the whole love thing, but not in a desperate, crying-over-martinis-with-your-BFF girly way.  Yi’s approach is scientific and rational. It’s none of my business, but Yi seems to have an ample smattering of Asperger’s if you ask me. (Not that you did. So nevermind.) But she’s definitely socially awkward. Still, there is a lid for every pot, and it seems wonderfully serendipitous when she meets and kinda-sorta falls in love with the guy from Juno. Yes! As luck would have it, she discovers love right in the middle of making her documentary about trying to figure out love! A cute movie. Quirky. I liked it.
Now I’ll tell you why I kinda-sorta hated it too. The whole thing was a set up. It wasn’t a real documentary at all. Yi and  Cera were dating before they started making the movie, so it’s unclear what parts were real and what were fabricated, which pissed me off. (I know, I know, careful readers. Just a couple blogs entries ago, I was waxing artistic about how energized and joyously challenged I was by the documentary/mockumentary/prankumentary Exit Through the Gift Shop. Seems contradictory? Well, I’m complex. I’m fickle. I’m a woman. Get over it. I don’t mind a movie getting tricky with me about art, but don’t mess with my romantic comedies, kay?)
Once Paper Heart ended, my husband looked at the clock and says, “Now what?”
It was eight o’clock or as hubby plaintively cried, “It’s not even Cuddle Time yet!” (Cuddle Time is 8:30 when he puts our daughter to bed.) And I had this moment of awareness, a flash-forward eight years, to what we’re going to be like when our kids leave the house for good.
I blurted out, “Oh my god! We can’t be married anymore! We don’t know how to be alone together anymore!” We were laughing at this point because the Cuddle Time comment killed me. (I know you don’t get it. You had to be there - and to have lived in our house for the last fifteen years - but believe me it was a good one.) But still, I was shrieking, “What the hell are we going to do for the next few hours? What the hell are we going to do for the rest of our lives?”
“We’ll be really busy with all our stuff,” hubby said with a confidence so thin I can see through it. “We’ve got a lot of stuff.”
This is true. We do have our stuff.  Lots and lots of stuff. But still…gulp…
It occurred to me that I’ve seen people without kids post stuff on Facebook about watching a double feature or sometimes even a movie marathon. I thought they were speaking metaphorically, but it dawned on me that maybe they were serious. We felt pretty freaky-deaky and daring as we decided to watch another movie. And we discovered that the beauty of the double feature is that you get to select a different class of movie for the second one. It doesn’t have to be a guaranteed good movie, because it’s not the main feature of the evening. The pressure is taken off of this side B movie because we’ve already been entertained. 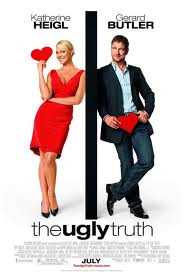 The Ugly Truth was the perfect side B movie. Formulaic but entertaining. Katherine Heigel was very nice to look at. Plus it got points for being a romantic comedy. Our expectations were so low that we both enjoyed it very much (after all, its only competition was Cuddle Time.) Heigel played a high-powered TV producer in Sacramento who was too high-powered to be lucky at love. (Pretty friggin’ sexist if you didn’t notice.) She was forced to work with a man she finds utterly repugnant, played by Gerard Butler (not my type), a macho apparent-playah who hosts a quasi-Howard Sternish relationship advice segment on Heigel’s show. But deep inside he’s a nice guy. And deep inside she’s not a controlling she-bitch. And – believe me, I’m not giving anything away by telling you this – they argue so fiercely that they fall in love.
So the movie comes to its predictable conclusion, and we click off the TV. We have spent the evening watching people try their hand at figuring out the whole love thing. Our kids will be home any minute and my husband and I sit contentedly in the dimness of our family room.  It’s quiet and cozy and nobody has left a sock or a wet towel on the floor in five entire hours.
In some ways, I suspect, this is what love really feels like.
Posted by Unknown