Harbor Dolphins, Not Ill Will 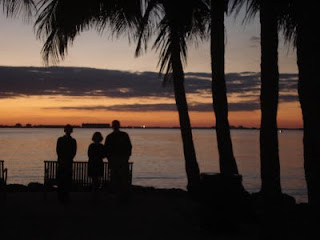 Today I was remembering my favorite harbor on Anna Maria Island. You see, there is this long, old pier, I believe at least some of it is the original pier from the 1920's when folks started ferrying themselves to this tiny haven. I may be wrong about this. Though the island is only about one mile wide and at most seven miles long, it still has a very modest historical museum guarded over by old-timey grandmothers, so we learned something about the pier during our visit there. Something that I've apparently forgotten.

No matter. You don't have know anything to take the long walk down the wide slatted boards, passing shrimp netters and fishermen, -women, and -children. There is a restaurant at the end of the pier. Like most of the restaurants on this slightly off-the-beaten path island, it's rustic but good enough or better. Actually, if you're hungry we should bike up to the other pier, which has a really great restaurant. My favorite kind of place, very come-as-you-are. No putting on airs there. When you walk in some brusque but good-hearted woman might bellow, "Hey darlin's. Sit anywhere you like." She doesn't smoke anymore, but it sounds like she still does. That's real seafood there. Get your fingers messy food. But we're not here to eat. It's still early, sunset, and we're here for the view.

There does happen to be an outdoor bar on this pier, so we might as well grab a frosty drink. Like I said, on Anna Maria you won't find the fancy-shmancy, pristine sheen of Long Boat or Siesta Keys, so don't expect much from this bar. Actually, that's what I love about this place. It's real. So the outdoor bar looks like a bar should look that has been exposed to the elements, years of resting elbows and beer being slid over the peeling counter. Drink in hands, we can sit on one of the rough wooden benches that circle the end of the pier. It's warm with a nice breeze, and the view over the Tampa Bay is pretty close to postcard perfect. (This is Florida, though, not the Caribbean. It's not paradise, but it's still damn nice.) If we sit here awhile - and why the hell not - we might get lucky and see some dolphins.

The first time I came out here, I was by myself. My family and I had all been biking together, but the rest of them sped up ahead of me (as usual.) In their haste they missed our destination, which was the post office across from the end of the pier. So, feeling somewhat abandoned and very “I’ll show them why the tortoise wins the race,” I wandered down to the end of this pier. I heard a little girl on the bench (the same one we're sitting on right now, in fact) looking out into the water and counting. I watched and waited, but couldn't figure out what she was talking about. So I asked her, all friendly-like, what she was counting. "Dolphins!" she said. Sure enough, there were three or four dolphins cresting out of the water now and then. I sighed, "Darn. My daughter would LOVE to see this. Too bad she is not here." (Sierra's big goal for our visit was to see her first dolphin.) Another big, disappointed sigh. 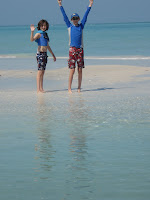 Not thirty seconds later, a head pokes out from under my arm, and I find my arm around my daughter. Somehow they had found me on this pier!

So Sierra and I sat there a while and watched dolphins. A couple times the dolphins actually jumped out of the water. It was excellent. But please, I'm going to have to ask that you go ahead and forget that story though because I'm probably going to tell it every time I find myself on this pier. The story is just too magical not to.

I'm pretty sure we'll see a dolphin if we sit out here long enough. It's so quiet and peaceful. Just you and me. And even if we don't, there's always tomorrow.

Email ThisBlogThis!Share to TwitterShare to FacebookShare to Pinterest
Labels: Update: Harbor Dolphins Not Ill Will, Updates