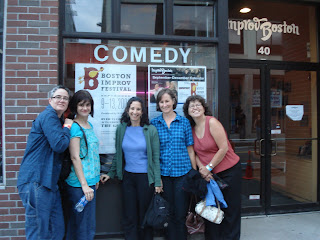 I am in the process of recovering from my Boston Improv Festival hangover. No, I didn't drink a lot. I think I just over-imbibed on improv, which is technically an impossibility for me but tell that to my aching head and rumbling belly. No matter. I had a BLAST! Improv shows, improv workshops, improv friends. It was - quite literally - all good.
My buddy Laura and I touched down at ImprovBoston on Saturday afternoon. Although we missed the first three nights of the BIF (woe were we, living two hours from Cambridge!) we quickly became caught up in the hubbub and delight. We took a terrific workshop on two-person improv shows from Jesse Parent and Joe Rogan of JoKyR and Jesster from Utah. First of all, they were totally nice guys, who were very supportive, informative and easy laughs. After enjoying the hilarious two-person (but multi-character!) Scheer/McBrayer show at the Del Close Marathon last month, I totally appreciated how Joe and Jesse broke down the structure into digestible chunks. (Ew, gross metaphor, but I'm exhausted and that's the best you're going to get out of me tonight.) The worst part about the workshop was that it ended way too quickly. Laura and I were both jonesin' to get more time with Jesse and Joe in order to try out our own two-person stuff.
Saturday evening was our gluttony of improv shows. We saw shows from 5pm until midnight, with a brief dinner break. Heavenly! Some highlights of the evening included the improvised musical troupe Veal from Upright Citizens Brigade (we all wished they could have had a whole hour to do their show,) Mrs Esterhouse from People's Improv Theatre in NYC, and MC Mr. Napkins who does comedy rap. He did a rap about a toy birthing pet pig that had my friend Maile and I pissing our pants. Just get a taste of him at Five Minutes of Napkins. You've never seen anything like this before.
Without a doubtiest doubt, the hands-down flaming favorite of our night was the troupe M.A.D. from UCB Theatre. Three women who were just that side of sane in all the best ways. Friggin' BRILLIANT! When we weren't doubled over in laughter, I was trying with all my might to analyze what made them so absolutely drop-dead funny and skilled, but I couldn't put my finger on it. They made it look so easy, I couldn't find the seams that held it all together. They are goddesses of comedy. When I had my I'm-not-worthy moment with them at the party later that night, they were still hilarious. One of them threw up her hands, proclaimed me her "best friend ever" and gave me a big hug. Drunk on funny, that one was. (The photo, below, of these comedy queens is courtesy of ImprovBoston's official photographer.) 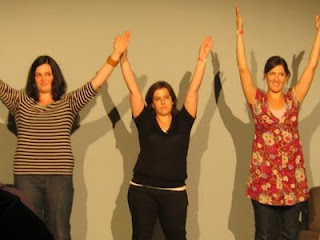 On Sunday, Laura, Maile and I partook in another fabulous improv workshop. Dave Marino, of ImprovBoston, taught us about "environment," typically the forgotten essential element in improv. (We're supposed to talk AND mime at the same time?! Even Marcel Marceau didn't try that shit.) We began the workshop going through a tell-all confessional of our environment crutches. (Dave didn't ask, but collectively we felt we had to get it off our chests.) Some folks always "grab a drink" in an attempt to do environment in a scene. (Me, I take it only a mere step further by pouring a drink from a Britta filter in the fridge. I'm not saying I'm better. I'm just saying I'm a different version of lame.) Some folks "make soup" when they don't know what to do with their hands. (How many "carrots" have I "cut" in a scene? Ugh.) One person's fall-back was a helium-filled balloon though he said when he was trying to shake things up he goes for a periscope. My personal crutch is the ol' empty box. For some reason, I feel like I need to start scenes by picking up an "empty box" and carrying it over to the other side of the stage. Oftentimes, I'll build a wall of boxes; though Laura shared with the group that sometimes when I'm getting fancy I'll open the box and take something out. (So stupid.) If you ever get a chance, be sure to ask Dave to talk about his Universal Rules of Improv. In particular, I appreciated his guidance in how to use the environment to funnel the emotional intent of a character or a scene. If I do my homework well, I hope to never lift another "empty box" on stage again.
Like my time in NYC last month, the highlight of my improv weekend was the people. I enjoyed getting to know better the folks at ImprovBoston for sure. But my time with Laura and Maile was the part of weekend that I will truly treasure. Maile and her husband Sean provided me with deluxe bed-and-board (not including the breakfast they tried to kill me with) which included great conversation and two awesome cats. Laura, my sister-of-the-heart, was the perfect weekend companion. Our hours of luxury with the New York Times on a pleasantly sunny day in a Cambridge park will be a touchstone for me that I'll come back to when I need to remember a moment of great peace and happiness. With friends like these, I feel like the richest woman on Earth.
Posted by Unknown